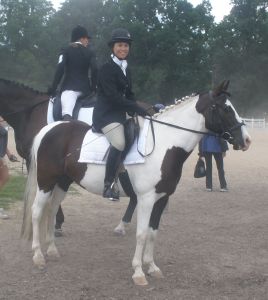 We weren’t looking, but as it sometimes happens, Cupid just kind of fell into our lives. I received an e-mail from a camp family asking if I wanted a new pony. On description, it certainly sounded like Cupid would fit right into our program, but I learned long time ago not to make decisions for other people. I passed on the e-mail and photo to Chris. Chris responded quickly that she was indeed interested in another pony. This, I must admit, to my amazement, as I know I had heard her not too many days before grumbling about “not wanting anymore horses” and “having too many already”. The arrangements were made quickly, and with in a couple of weeks Cupid was on our door step, pony blankets, halter and treats in hand (or should I say hoof?).

Camper Morgan’s mom, Liza was nice enough to give us all the information she had on Cupid’s back ground. As I usually know nothing of the horses that come to Cedar Lodge, this was a rare treat. Here is what Liza said:

“I got him from a lady up north in June, 2008. She has about 200 ponies/horses. She leases a lot of them out to various camps over the summer. She also always has several up for sale. She pulled him off the trailer for us to try. She said he was 7 or 8 at the time, and my vet confirmed that that was about right. But, I don’t think she knew the specifics on very many of the horses. He was clean and clipped like he was going to a show, but his feet were awful, so I think there was a little benign neglect going on. She thought he had spent a summer or two at a camp doing trail rides and maybe he had done some 4-H with her nephew. (This was probably the history of all of the ponies on her place, but she was a nice lady.) We got him because he was incredibly cute and his size made him versatile. My husband could get on him and walk around the trail behind me (and he has). Morgan was too young to really compete in eventing so we had time to figure out whether he’d work or not.
He did great the first year we had him. We spent a lot of time in our smaller dressage ring outside and in the indoor, mostly just getting him in shape and teaching him to jump. We also went out on the trails around our stable a lot which he enjoys. He was a quick learner with jumping. I was pregnant at the time, but I had a grown up friend who worked with him. And, Morgan herself did a lot of the jumping too – especially the gymnastics exercises, but also some small course work (2-2’3″). My friend and I have jumped him over courses at 2’9”.

My prelim event horse is 15 now, and will be ready to settle back in to the lower levels in the next couple of years. He’s incredible with Morgan (and anyone else) and never puts a foot out of place, so he’ll be her “pony” (although he’s 16 hands) and I’ll get myself a new Canter horse to train for eventing. And Cupid will have the perfect home with you, where we can visit him any time. Your rings are all enclosed, not generally over stimulating, and you often ride in groups of people doing similar things which is the situation that he’s perfect in.

Cupid is one of the most gregarious animals that I’ve ever known. He clearly knows how cute he is, and he expects everyone from dogs and cats, people and horses, will love him. And, pretty much everyone does…

Cupid did in fact fall into his life at Cedar Lodge without a mishap. We turned him out with the camp herd and he showed all the wisdom of a mature pony that had lived in a herd; he stayed away from the big bosses, made friends with the middle group, didn’t pick fights but stood up for himself when need be. Kind of like the new kid in school. With in a week, he was happily coming in and going out with out assistance, finding his stall in the morning without help.

A week after he came, it was a reasonable temperature and I found Ashley in the barn with nothing exceptional to do. I told her that we had a job that needed doing and she should report to Chris. Of course, the job was Cupid’s first Cedar Lodge ride. That ride happened that afternoon and was repeated the next day. Though I wasn’t present, I was given the facts by Chris. “Cupid is a typical pony. He wanders if he can, bows a bit at the mounting block (door) and tested to make sure Ashley was paying attention.” I am told his trot is forward and his canter is wonderfully slow. He jumped willingly with out speeding up or trying to avoid the jump. He reminded both Chris and Ashley of Malarky, but younger and more talent. All and all it sounds like a great match!

As Cupid appears to need little but some occasional rides to ready him for camp, he has been enjoying some vacation time, waiting for spring like the rest of us. I have heard plans that Ashley will take him to a couple of schooling shows this spring to see how he fairs. I am sure I will have more to write about this cute, talented pony in the future.