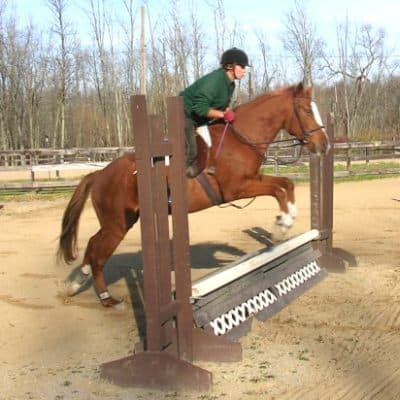 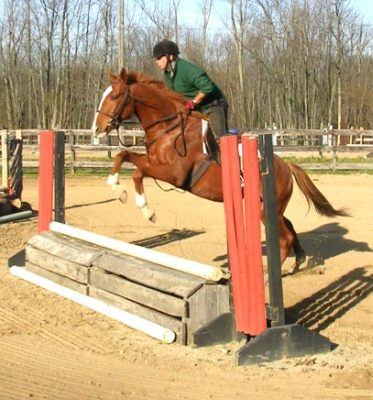 Going to horse auction is certainly not a new activity at Cedar Lodge, but it does seem (happily) that it is an activity we are feeling less and less in need of. Committing more time to training the horses we have, committing more money into their yearly care and having more people at the stable year around to ride the horses that need training, has left at least some of the needs of the auction to the way side. But time marches on. Chris and I feel strongly about holding on to our seasoned campaigners as long as we can. Many we have for 10, 20, even 30 years, and with that reputation, sadly it means that some times we will have to replenish for our losses. 2006 was just such a year. Suddenly, it seemed that I looked around in April and realized that we were 4-5 horses short for the camp season. Yikes. We watched the horse ads and talked to friends. We borrowed a couple horses the summer, we bought one locally, but come June we were still short 3 or 4 horses. And so, aware of the Shipshewana auction I made plans to take the venture down once again to see if I could find suitable horses for Cedar Lodge.

Though we were short camp horses, that does not mean that the stables were empty. Our year around boarder population had gone up, and Chris and I still owned over 30 head. It was just that our programs had become more demanding. As it was, I don’t think Chris was overly thrilled with the possibilities of my trip to Shipshewana. Truth be told, I have a bit of a reputation about horse auctions. Something about having a 6 horse trailer and the urge to fill it, even though I was only suppose to buy two……..but never mind. Time goes on, and I have gotten at least a bit wiser, or at least cheaper as I have aged. So it was that Chris and I were sitting at the lunch table right before I left with my trailer. As usual, I had asked Chris what she felt our weaknesses were in our program. What kind of horses that I should look to buy.

“Needs to go walk, trot, beginner canter. Must be well broke. Big bodied. Nothing smaller than 15.0-15.1. No young horses. No show prospects (she always says that). It went on and on. It was quite a laundry list and I listened patiently, knowing that in my heart, I would be lucky if I found one of all those things in the horses that I would be offered. I nodded and got in my truck.

As Shipshewana is an hour drive from camp and I prefer to not haul horses alone, I asked my good friend and backpacking partner, Craig if he would like to accompany me on my trip. Craig, always up for a new adventure, said, “Sure.” After all, he had never been to a horse auction.

It was near the end of the day. I had already bought 3, and though there were indeed 3 spots left in the trailer, I was determined to not fill them all. In fact, I was content with what I had bought so far and considering going home. Craig had had enough and so had I. Too many old, lame, under nourished and ill handled horses for one day. As Craig and I discussed vacating, a smallish chestnut entered the ring. I was aware of his presence, but not interested. He was small, obviously young, thin, and dull eyed. I brought Craig’s attention to the ring.

“See,” I said, “this is exactly what I can’t buy if I expect to meet Chris’s approval. He is small, not even 15.0 hands, I think. Small boned, too. Skinny, probably not broke and definitely young. THIS horse would get me in trouble.” Just about that time, the the little chestnut picked up a trot across the small auction ring.
“4 years old, thoroughbred gelding, no papers, 30 days break training. The bid is at 300.00 dollars.” Claimed the auctioneer.
I raised my hand in bid. Craig looked at me in disbelief but said nothing. 6 bids later, when they claimed my number as having the winning bid, Craig finally spoke up.
“Maybe I understood your wrong. Didn’t you say that this horse was exactly everything that Chris DIDN’T want in a camp horse?”
I nodded. “Yes,” I said. “But then I saw him trot.”

All rules have some bending and Chris and I have an unspoken agreement (sort of). When something is dumped in your lap that you feel that you definitely will regret passing up, pick it up, intentions be gone, and run with the chance that your decision will pan our right in the end. The chestnut was that kind of horse. He was young, he had only been backed for 30 days (I don’t think they had taught him to canter yet), he was small, and he was DEFINITELY NOT A BEGINNER CANTER HORSE! What he was, was cute, had potential, had a beautiful trot and looked to me like he could jump. That was enough for me……and oh, did I mention? He was cheap.

The summer of 2006 Gomer worked a light schedule. We kept him in the intermediate and advanced jump classes on non-jumping days. He only worked one hour a day, with minimal cantering. Gomer (short for Gomer Pyle) was young enough and inexperienced enough that we were concerned that he didn’t have any thing happen to him that would scare him. Then fall 2006 came. Gomer was first on my list of horses I was dieing to get on. Our first couple weeks were not impressive. He didn’t know how to go forward, turn, stay on the rail OR stop, and that was at the walk and trot! I didn’t think we would ever get to the canter! But we did, (mainly because I was getting bored) and eventually, after about a month of 5-6 days a week of intensive flat work, Gomer started to show signs that he was getting it. Gomer might not be the sharpest knife in the drawer, but he certainly does have potential. Shortly after he was walk, trot and cantering consistently we started to jump and it was obvious from the start that Gomer was a natural. He may be small, but Gomer is built well for jumping and has a ground covering stride. With in a month or two, Gomer was cantering 2’3″ courses, and by the time he had his shoes pulled to start a much deserved break, he was starting his flying lead changes.

The most pleasant thing I noticed after that first winter that Gomer spent with us is the look in his eyes. By March, 2007, Gomer no longer stood looking at the corner with his head drooping towards the ground. He seeks out humans, head out his door, checking out what’s going on in the barn. When out in the pasture, he seeks out his pasture mates and plays with all the gusto a coming 5 year old should. His back and neck are well muscled and his haunches are well rounded. We have big plans for Gomer. It may take a year or two of part camp, part professional rides. Certainly some showing needs to be added under his belt and there will certainly be some lessons left to be learned, but I think that in a year or two Gomer will be a super show team, intermediate and advanced jump horse. In the end, who knows? Gomer just may end up being that walk, trot beginner canter horse as well.

I find that with Cedar Lodge horses, especially the young ones and especially the ones that are show horses, I have to go back every couple of years and update their pages. I think it’s time for Gomer.

After my last writing of above, Gomer went on in the following spring and fall to several schooling shows with either Kali or I. He hacked and jumped willingly and the time that we spent in the saddle allowed him to get some much need mileage.

In the early summer of 2008 we found ourselves in a dilemma. We had a very talented show team rider/camper-Katherine G. who needed a show horse. Katherine was committed to going to several horse shows with us, but did not have her own horse. Not usually a problem, as many people lease from us, but we were all leased out, with nothing to give to Katherine for the season. Chris and I talked. We decided to try Katherine on Gomer. Gomer was way more green than we would have liked, but Katherine was good enough we hoped that the two of them could make a go of it. From the first time that Katherine rode Gomer, it was a match. Katherine wasn’t effected by Gomer’s baby weeble wobbles, and Gomer was brave, something that Katherine needed at that point of her riding. Gomer and Katherine started showing together in June, and by September they had shown in 6 shows. The mileage they had clocked away was invaluable to both of them. In November at the LMHJA banquet, Katherine was up more than she was down collecting ribbons and awards for their accomplishments.

Gomer at Twin CitiesAt the end of the summer of 2008, Katherine bought her own horse, Jack with the expectations of not only riding Jack in 2009, but moving on to the regular ring and the larger fences in the next summer. Sadly, Jack had a lameness in November of 2008 and by the late spring of 2009, he was still not healed. Katherine’s mom, Marie gave us a call and asked for a horse for the show season. We thought at first of Gomer, but at 15.1, Gomer was on the small side and Katherine had now grown. Furthermore, it was time to have Katherine to move into the Regular ring with larger jumps, wider oxers and longer striding. Could Gomer manage the change? Katherine came up in June and we tried several horses out for her. Nothing seemed quite the match we were looking for. We brought Gomer home from up the road at Good Neighbor Karen’s pasture where he had been vacationing. Gomer hadn’t really been ridden much since January, but what I had seen out of him then, and a couple times in April had impressed me. I thought it just might work. Katherine was willing to give it a try.

Gomer wins the MedalGomer managed the striding in the regular ring, and he managed the bigger fences. In fact, when the oxers were wide, he just tried a little harder. Katherine rode Gomer in the 2’3-2’6″ division all of 2009 and when the LMHJA banquet again rolled around in November, she was once again up for several awards in year end divisions. Katherine has moved on from Gomer now. She has Jack who is sound and ready to show, and has another new horse as well, but Gomer is not done yet. Far from it. In the fall of 2009 Gomer started up with one of the adult show riders, Julie. Gomer has much he can teach Julie and Julie is excited to have a new horse to ride and learn on. During the summer Gomer will probably be used for show team…..but…….who know where this talented young horse will end up? The sky’s the limit. I’m sure I will have more to write in a couple of years……..