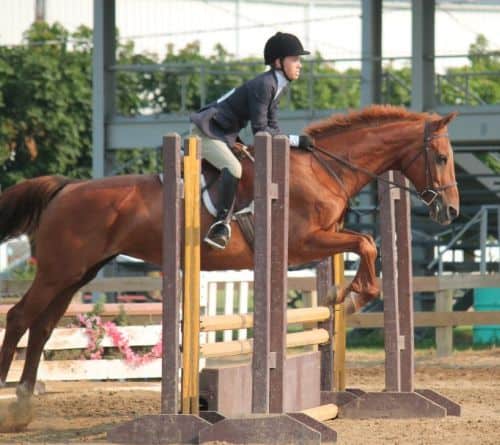 We had several chestnuts with white stars. And we thought we may have used up our luck on acquiring broke, experienced, ready to use show horses. But when Nikki came into our sights, we just had to take a look. She’s a 16.1hh chestnut Hanoverian mare, born around 1994. She was initially boarded at a local hunter jumper stable and moved to the family’s home. There, she had a couple babies, and her owner just didn’t have the time to keep her in the consistent work that she needed, and Nikki had a fair amount of energy and not enough activity. But she had promise, and she had experience already. When Nikki arrived in about March 2014, we spent a few months questioning our decision. She was hot, spooky, and didn’t have very good brakes. Becca, Kali, and Kendra took over her riding and provided the patience and safe place to settle down, and she finally started to show her education. We knew there was a good horse in there, but had to wait a little to find her. Nikki went to a schooling show that spring with Kendra, and then showed at several of the LMHJA shows with Claire that first summer. She was also used frequently in the summer lessons. In November and January 2014/2015, Nikki learned about IEA and did well, not minding all the different riders taking her for a go. Nikki is mostly used for intermediate jumping lessons, as she still can be forward at times.Nikki Jumps She’s also the only horse we’ve ever known to full out snore standing up, but we won’t judge her for that! She tends to look a little cranky in her stall but is actually very sweet and takes her treats VERY seriously after her rides. Our luck, indeed, did not run out with Nikki, and adding yet another chestnut with a little star wasn’t such a bad idea. Nikki is sure to be around for awhile for lessons, showing, and IEA rides.