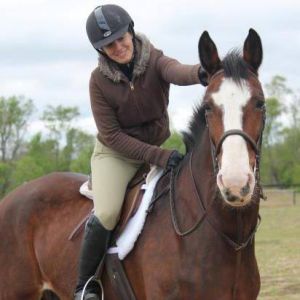 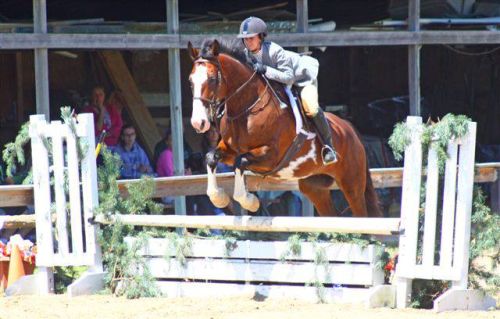 What do you get when you cross a Clydesdale with a Saddlebred and then let it sit in pasture totally unbroke for…oh about 15 years? We hoped that answer would be a good vaulting horse. Amy and Becca went to look at Sadie, the last (and favorite) horse of an elderly gentleman who, due to health reasons, could no longer keep his pets. He had one son who bred Clydesdales and one son who bred Saddlebreds, and he had a few of their crosses, also known as a Georgian Grand. When they picked Sadie up, she knew nothing but had been loved from the day she was born. Amy went to load her in the trailer and Sadie stopped, because apparently Sadie was only “lead” places she felt like going, when she felt like going. Turns out, not only was Sadie not broke (which we knew) but she really didn’t even know how to canter; she trotted out to pasture, she trotted in from pasture, but she never cantered. She also decided she didn’t care for vaulting much, although she still was not broke under saddle. Kendra and Kali decided they had some time to try to break her under saddle and see what the heck she’d find for a career. Kali started that summer (2012) and then had to go back to school so Kendra continued through that fall and winter. Sadie JumpsCantering was dicey for a bit. She had one speed (quick) and about a 14’ stride (average is 12’). Fortunately for Sadie (and fortunately for Kendra), all was not lost. She had a brain and boy did she have cute knees over fences! And now she canters out to pasture, and in from pasture, and even “just because” across the field. Sadie’s training isn’t finished, but you may not see her in lessons as Kendra refuses to share her (though you can hear her cantering!) But if you pass her while she’s on crossties, she’ll probably swing her butt toward you to be scratched. And if her riding career doesn’t pan out, she may be able to make a living being a Bud Lite model, as she is the “low calorie” version of the Budweiser Clydesdales. Sadie is a 16.1hh bay with four tall white socks and a white blaze with a white blotch on her barrel, born in about 1998.

Time has marched on. Sadie finished several successful years as a show horse, and due to problems with her legs, had to be retired from jumping. In 2016 Sadie started a semi successful career as a CL school horse for walk, trot, sometimes canter riders. Sadie VaultsLet’s say, Sadie is still adjusting. I swear sometimes she gives a look like, “you spent all that time telling me I could only do what you told me to, and now you want me to just assume what you want?????” On top of her riding career, we have moved full circle and in the winter of 2017 Sadie made her second debut as a vaulting horse. This time, I think it just may stick. Sadie really doesn’t care what the vaulters do on her back, and the more she goes, the better she is. I see years ahead in Sadie’s CL future.