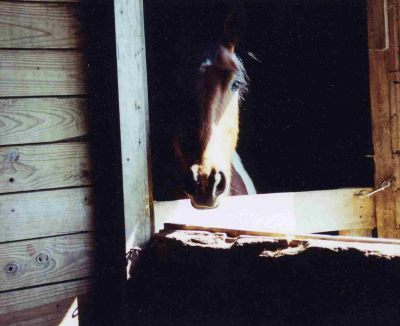 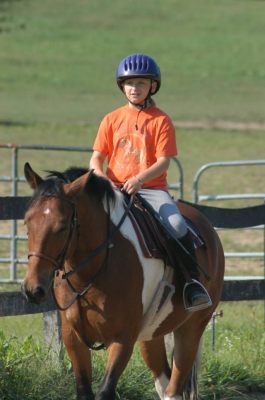 Stormy was an auction horse, but not the obvious kind. When I purchased a small white pony, (that we named Merry Legs) it soon became obvious that we would like to keep her around. During the following fall, we became increasingly concerned with her aggressive behavior towards the other horses in the pasture. I guess this would be the appropriate time to say, “If the answer was any more obvious, it would have to be pinned to your forehead (or something like that)!” but it just didn’t occur to us until my sister-in-law Nan mentioned one day, “That Merry Legs, she is awful aggressive, AND she’s fat! Are you sure she isn’t pregnant?

I am so glad we are the horse experts and have to have someone else bring things to our attention.

Merry Legs was checked and sure enough, she was in foal. Dr. Butz thought sometime in May or June. (I asked him what color the foal was, but he said he wasn’t that good). You guessed it. Stormy was the bi-product. We named him Stormy because (Be careful. I may be dating myself….. You may have to go ask your parents on this one) he looked like “Stormy, Misty’s foal.” A great book from the 50’s based on the true Chincoteague and Assateague ponies of Virginia.

He was worked again for an additional couple of months this fall. Chris even managed to watch him canter after I had worked with him for a couple of days. “OHHHHHHH….. what a pretty tail!” I don’t know what I expected, but it was not that. Slowly but surely, Stormy is becoming a solid(er) citizen. Being a pony, you can only expect so much. Stormy certainly has his days. Remember he IS only 4, and I figure they go through pony-dumb until about 8 (some longer. Depends on how quickly they mature……). My plans for him this summer are about the same as Spot. Advanced rider hack horse/pony. That is about it. I like taking them slow and giving them a chance to mature.

So this summer. When you see Chris after she has been dealing with Stormy and she starts in with, “That Stormy!” or “That Alpo!” -Which she occasionally affectionately calls him when he has been REALLLLLLY bad. Just hear her out and then quietly remind her, “Yeah, but he has a pretty tail!” I am sure she will appreciate the reminder.

Update:
Stormy made it through the summer. We decided that since his canter is a bit immature, that Stormy should stay in the walk, trot classes. He was a super star. Who knows what is up for him this summer? A canter class, or stay with the walk, trotters. Only time will tell. Either way………next fall I see JUMPS in his future!

A further update:
Stormy may have done well that first summer in the walk/trot classes, but by summer 2005 he had reverted to his bad little pony ways and figured out any trick he could think of to avoid work. Though he did add a few classes and skills, like polo (even though there was some debate on whether he really has “Ball” sense, or whether he was just chasing down the ball to kill it), to his repertoire, it was clear to Chris and I that the fall of 2005 was definitely time for Stormy to move on to a college education. 3 months of rehabilitation later, Stormy had managed to learn to jump 2′ courses and was started on flying lead changes. He managed his first schooling show and ended up Champion in two divisions. With a bit of time, and luck, I think Stormy will make a heck of a Show Team contributor. This summer he is due to go to some additional schooling shows with big boring me in the stirrups. From there, who knows? Graduate School?Stormy and Malik

Further, further update:
Stormy did make a show pony. He ended up being Ashley Butler’s show pony for several years, and then went on to take several other riders around as well. He was never good at lead changes (too lazy…why bother) but her didn’t care about the jumps and he had beautiful form over 2’0-2’6″. When not showing, Stormy was used in advanced classes until his hocks started to show too much wear and we needed to move him down to less advanced classes. That became a problem. Stormy was the laziest horse I have ever known. For several years, I winced as I watched riding staff Amanda chasing Stormy around trying to make him canter with some poor rider. Stormy hated flat work and he only remotely woke up when he got to jump.

I was at my wit’s end as to what to do with him. He was too mean to the other horses to make a walk, trot beginner horse, too lazy for cross rails (and he hated people with rough hands) and too old to do the advanced classes. What to do? The answer came in the form of a random conversation between me and one of the Cedar Lodge vaulting coaches, Jane Egger. Jane was bemoaning the fact that she reallyStormy and Jane wanted to buy a pony for vaulting. “Why not try Stormy?” I asked. Jane really didn’t know who Stormy was, but I was quick to remedy that. We whipped out a surcingle and some vaulting kids and on the lunge line he went (a place that he had not been for over 10 years, NEVER needing to be worked down…..). It was clear in one lesson that Stormy was a perfect fit for vaulting. He did not (and never had) cared what kids did on his back, as long as they left his face alone. He had a healthy respect for the new, improved, LONGER lunge whips and he had wonderful gaits. In 2015, Stormy started his new career as a vaulting pony and works enough now in his new job, that he is rarely ridden. He is a hands down favorite with the under 3’0 vaulters and specializes in walk/trot, though there is talk of a canter in his life. I had only to watch him with one of our smaller, but talented vaulters mastering a trot mount by herself (a skill that she would never be able to do on a bigger horse because of her height) to realize that we had made the right decision. It sounds funny to take 15 years to find a horses true profession, but some of us just take longer than others……